Letting Our Light Shine In Our Community

A Caring Christian Family Where We Grow Together
Let Your Light Shine ~ Matthew 5:16

The words of the Sermon on the Mount remind us that a light should not be put under a bowl – it should give light to everyone, including oneself.   In possession of God’s light and His love, it is possible for us all to show something of his light in our families, in our school, in our community and throughout the world. 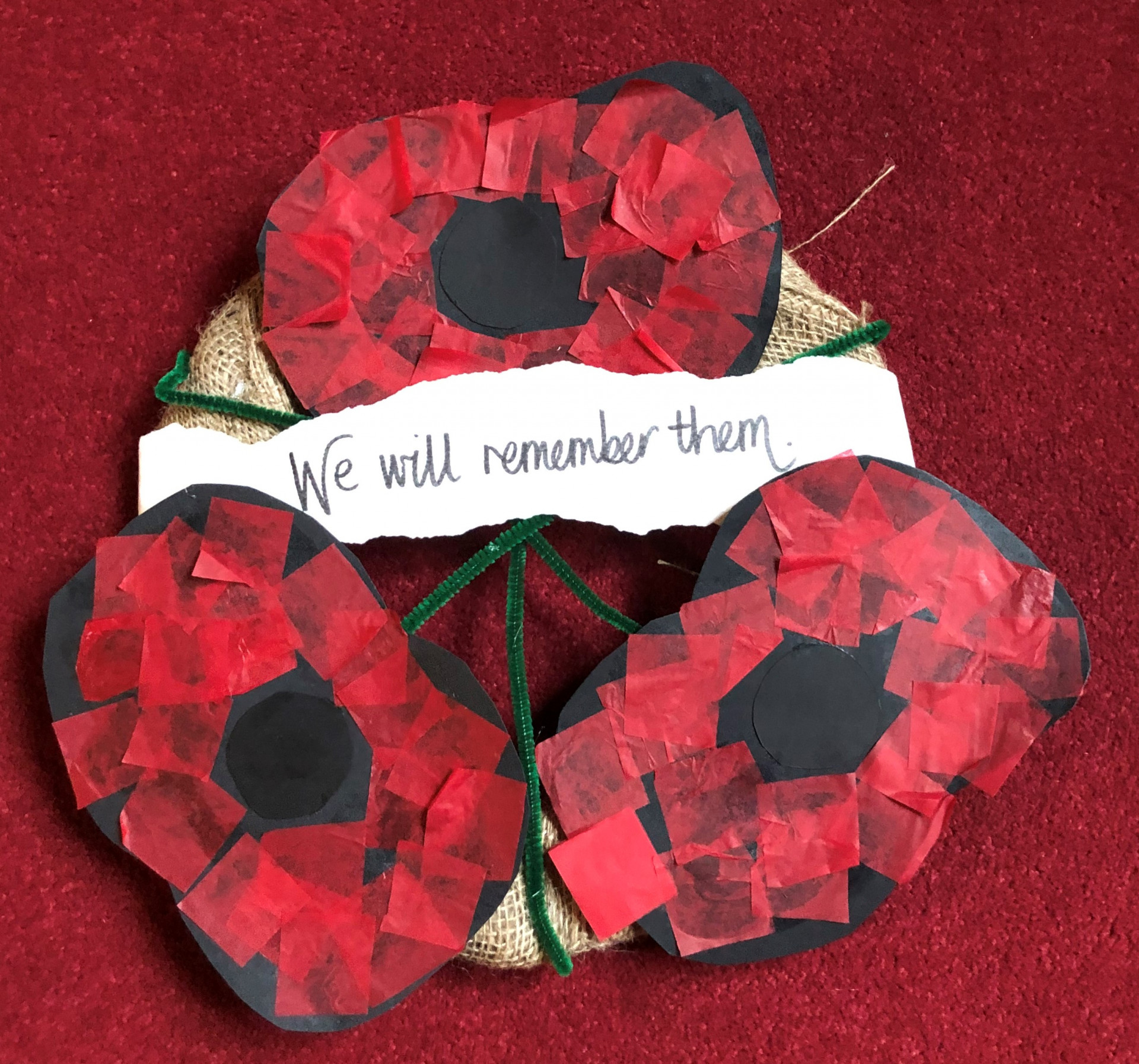 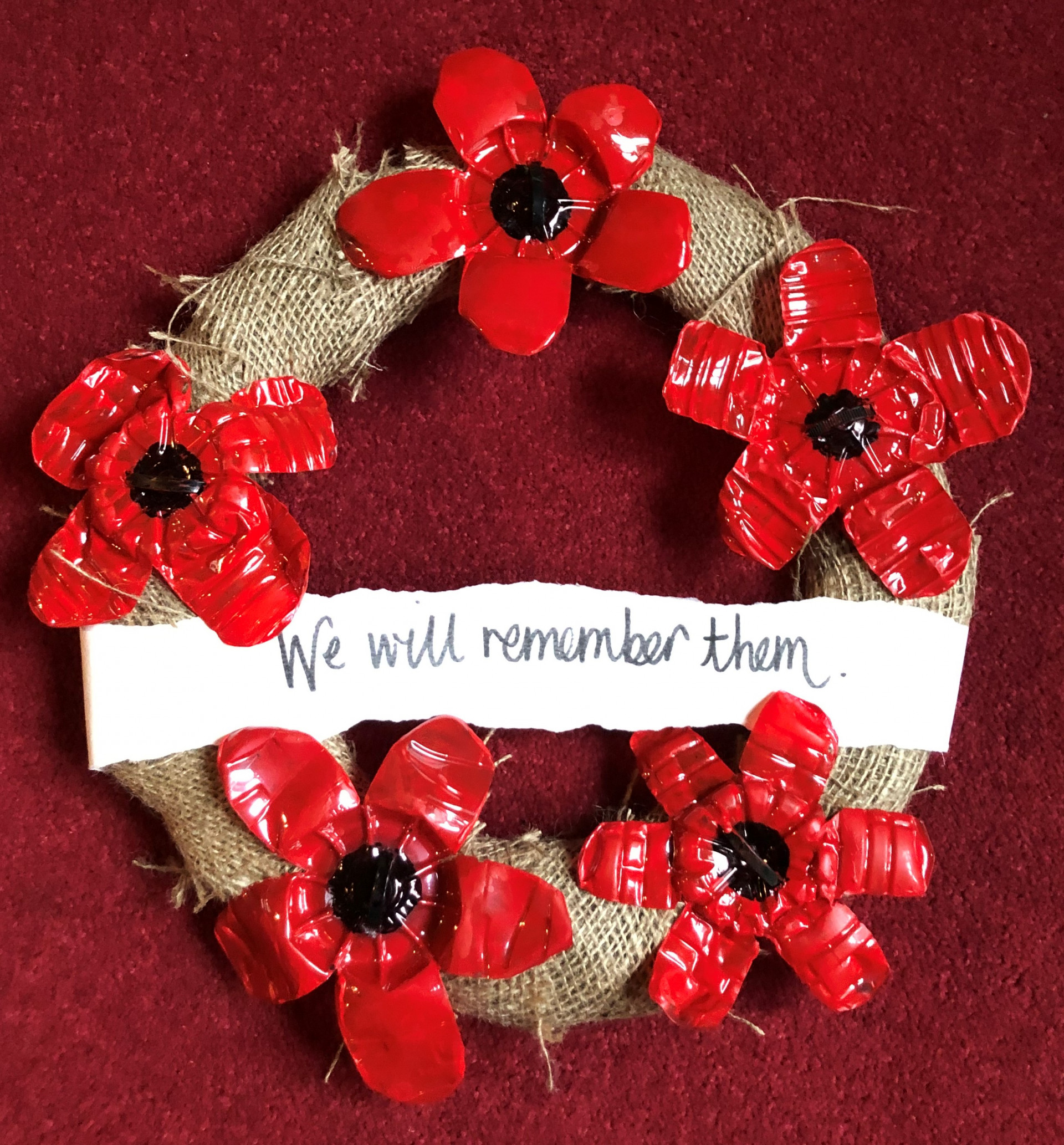 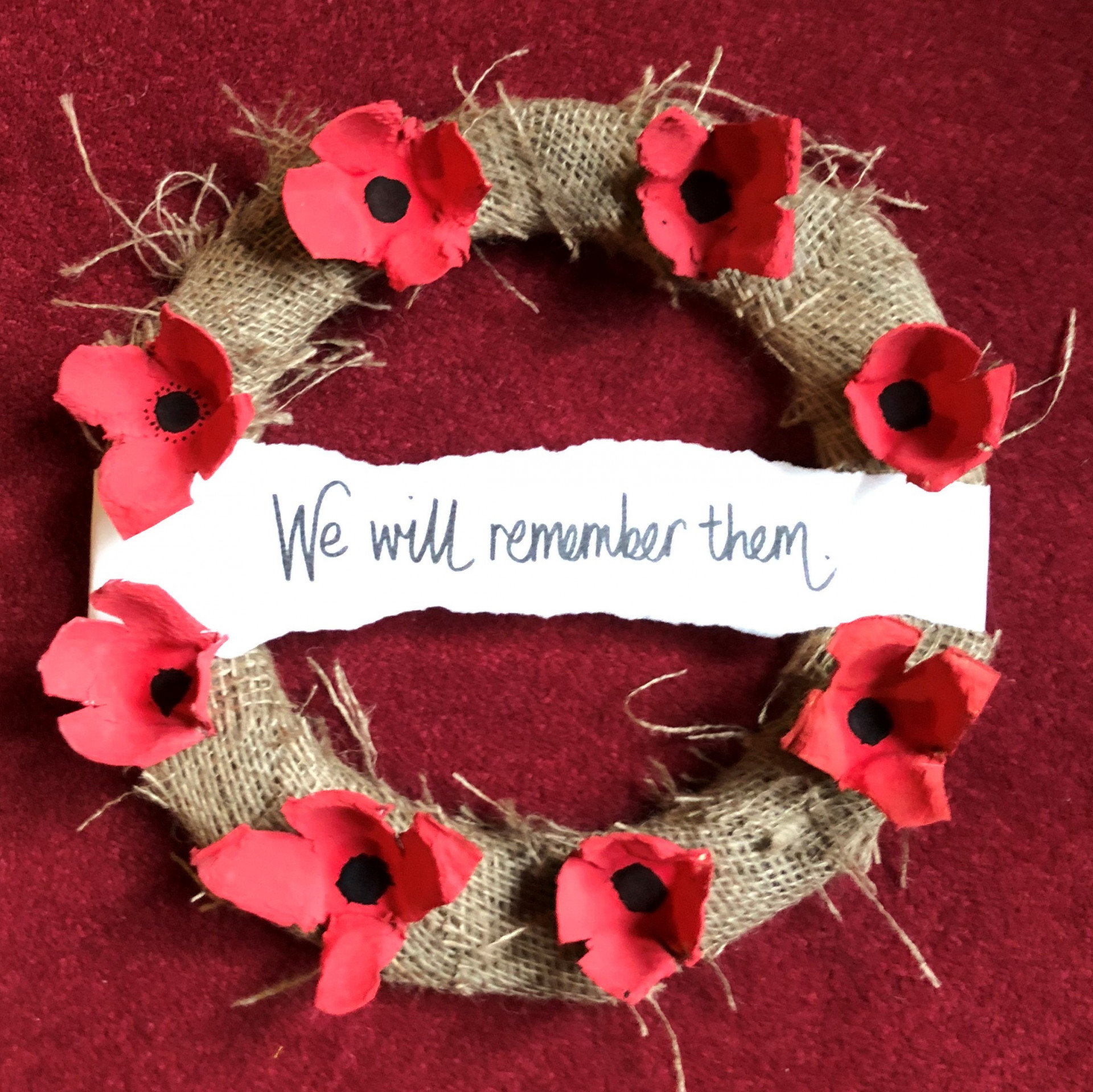 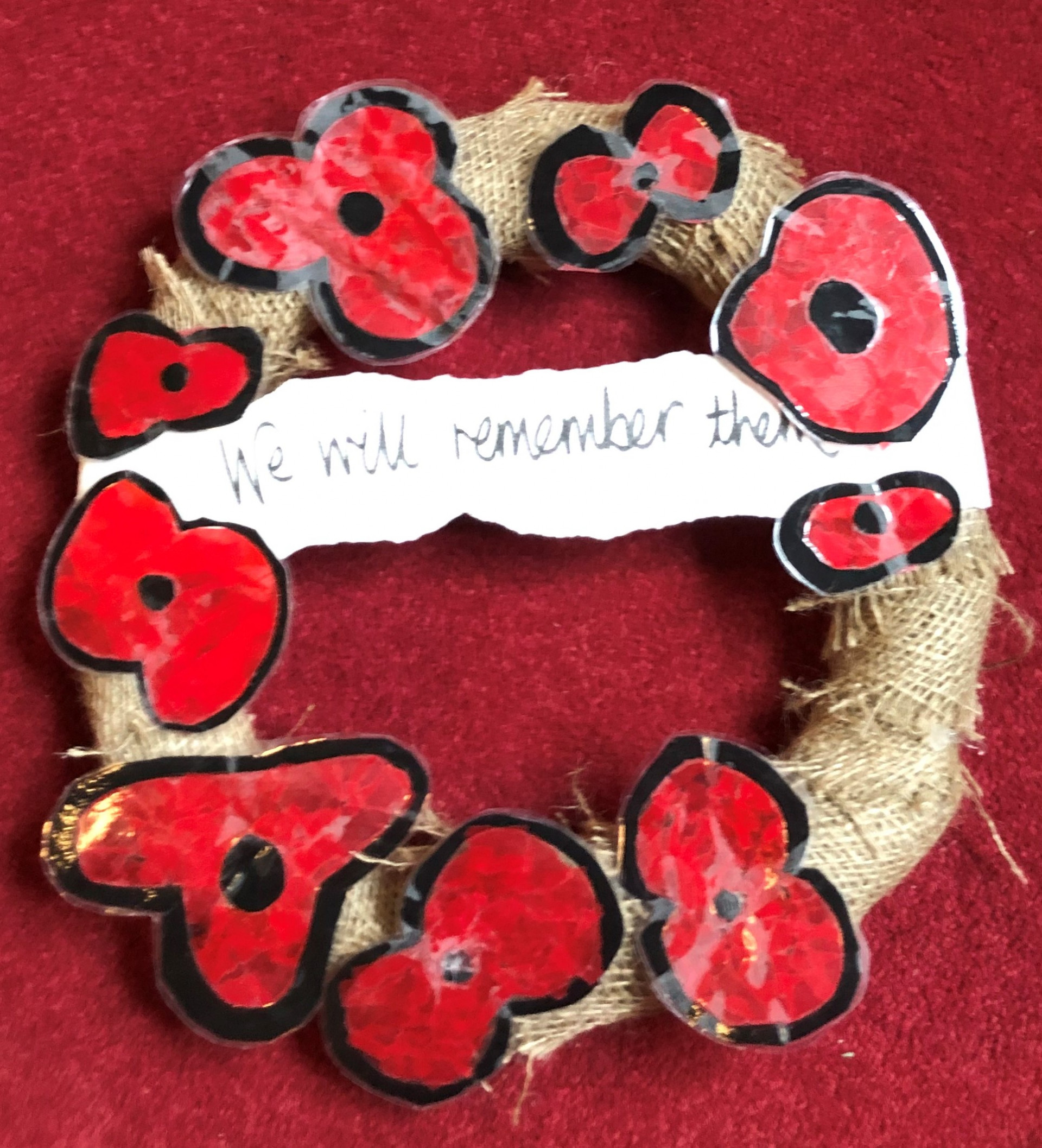 We came together this morning to honour those who served in the armed services and thank them for the sacrifices they made for us.    Red poppies are a symbol of remembrance and hope for a peaceful future.    During WW1, much of the fighting took place in Western Europe.  The countryside was blasted, bombed and fought over repeatedly.

Beautiful landscapes turned to mud; bleak and barren scenes replaced them.   There was a notable and striking exception to the bleakness - the bright red poppies.    These resilient flowers flourished in the middle of so much chaos and destruction, growing in the thousands upon thousands.   Some of our relatives and local residents have served in the armed forces to protect us.   Some gave their lives for us.  We are truly thankful.

Three brave young men from Warmingham gave their lives for our country during World War 1:

Sergeant Richard Ashley who served in the Cheshire Regiment whose motto was ‘ Ever Glorious’.  He died of his wounds on 19th October 1914, aged 28.

Private William Boulton was killed in action on 24th April 1916, aged just 21.  He served in the 7th Battalion of The King’s Shropshire Light Infantry.     The battalion earned the most honours so William was part of a very dedicated and brave group of soldiers.

Private Joseph Henry Thomas died of his wounds in October 1918, only days before the Armistice.    Like Richard Ashley he served in the First Battalion of the Cheshire Regiment.    They would have known each other, and may have even be good friends.

They are commemorated on the brass plaque on the west wall here in St Leonard’s.    The clock in the clock tower was purchased after the war in their honour.

We are also truly thankful to our brave relatives who served in the armed forces to protect us.

Officer Carl Hoyle who served 27 years in the RAF.    He completed several tours including some in Afghanistan, Iraq and Bosnia.  He even had a mention on the Queen’s Honours List and received a medal from her.

Private Dennis Rawlings who was killed in battle.

Corporal Stewart Butters served with the Royal Engineers for 13 years.  He received medals for serving in Iraq and Afghanistan.

Corporal Arthur Walker who was in command of a tank in World War Two.   He was involved in the D Day invasion.

They shall grow not old,

as we that are left grow old;

age shall not weary them,

nor the years condemn.

At the going down of the sun and in the morning,

we will remember them. 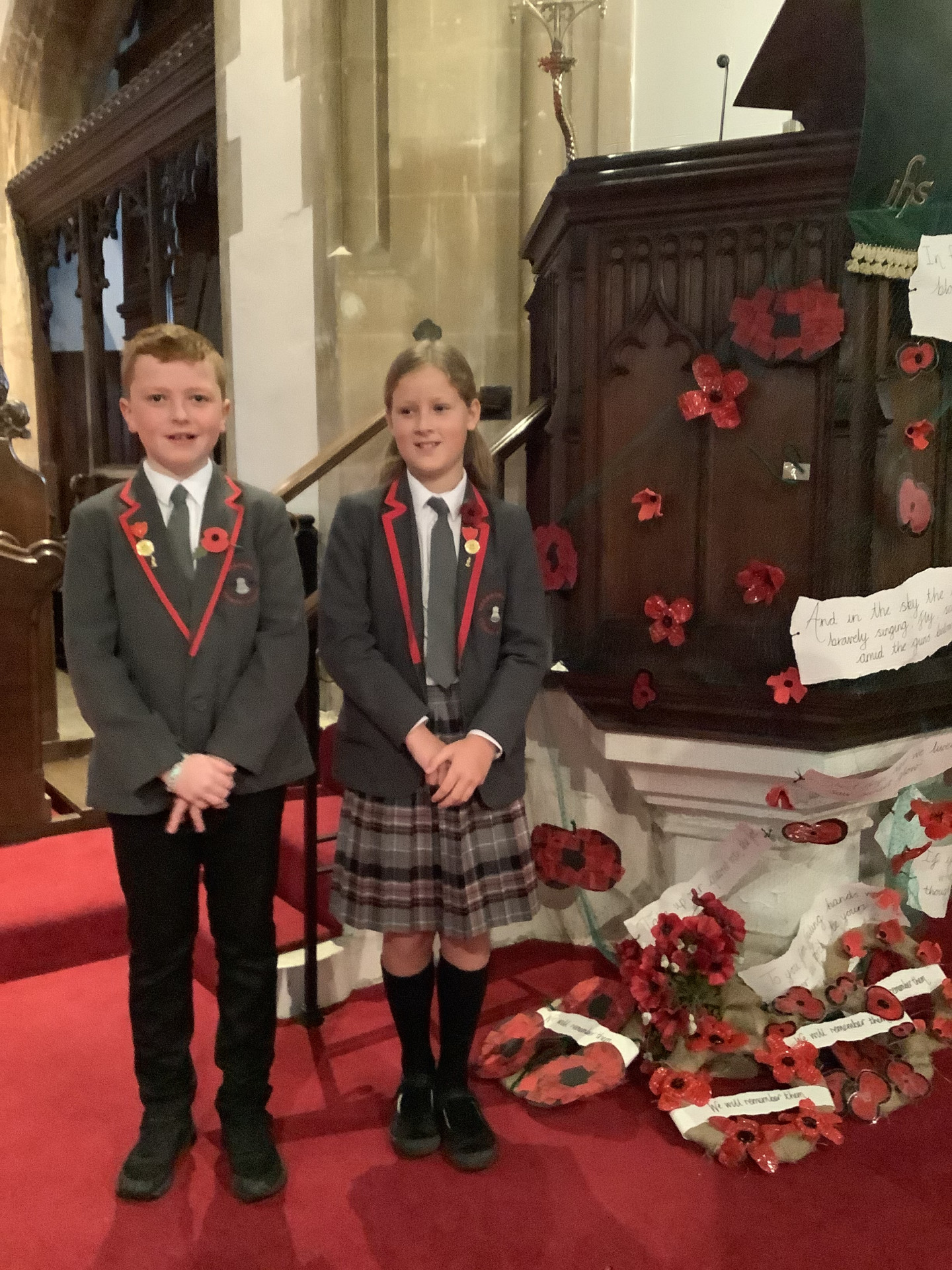 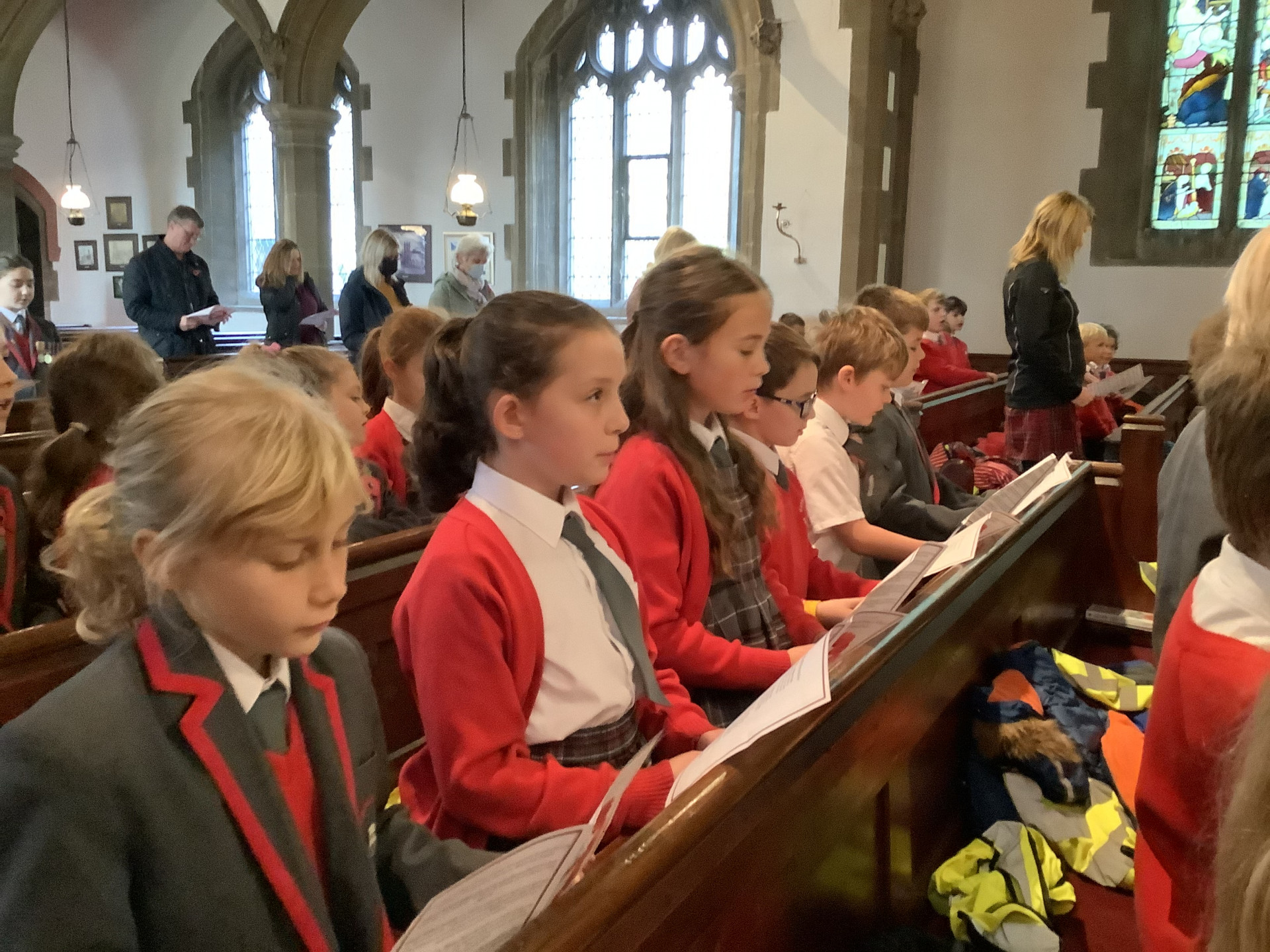 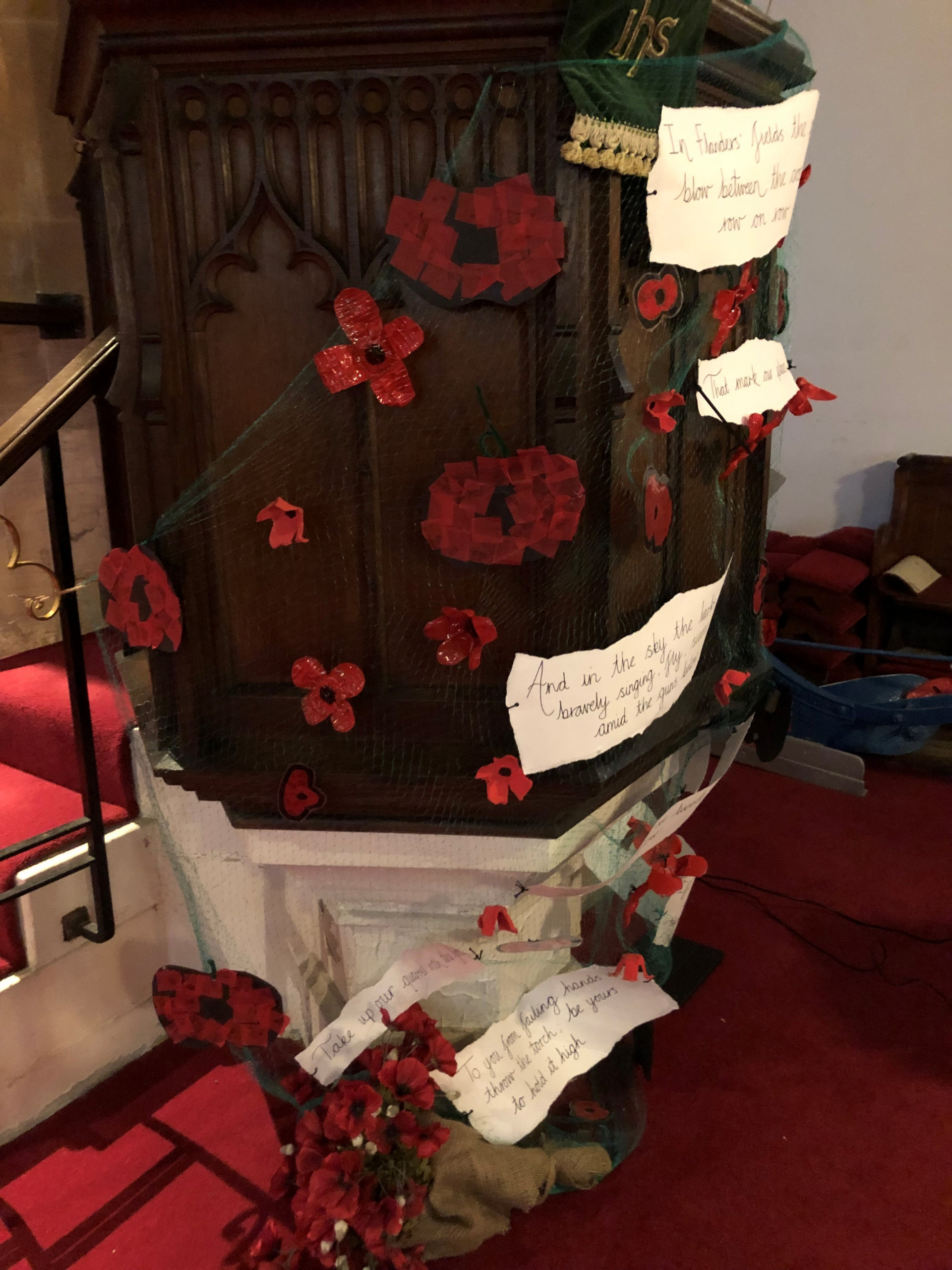 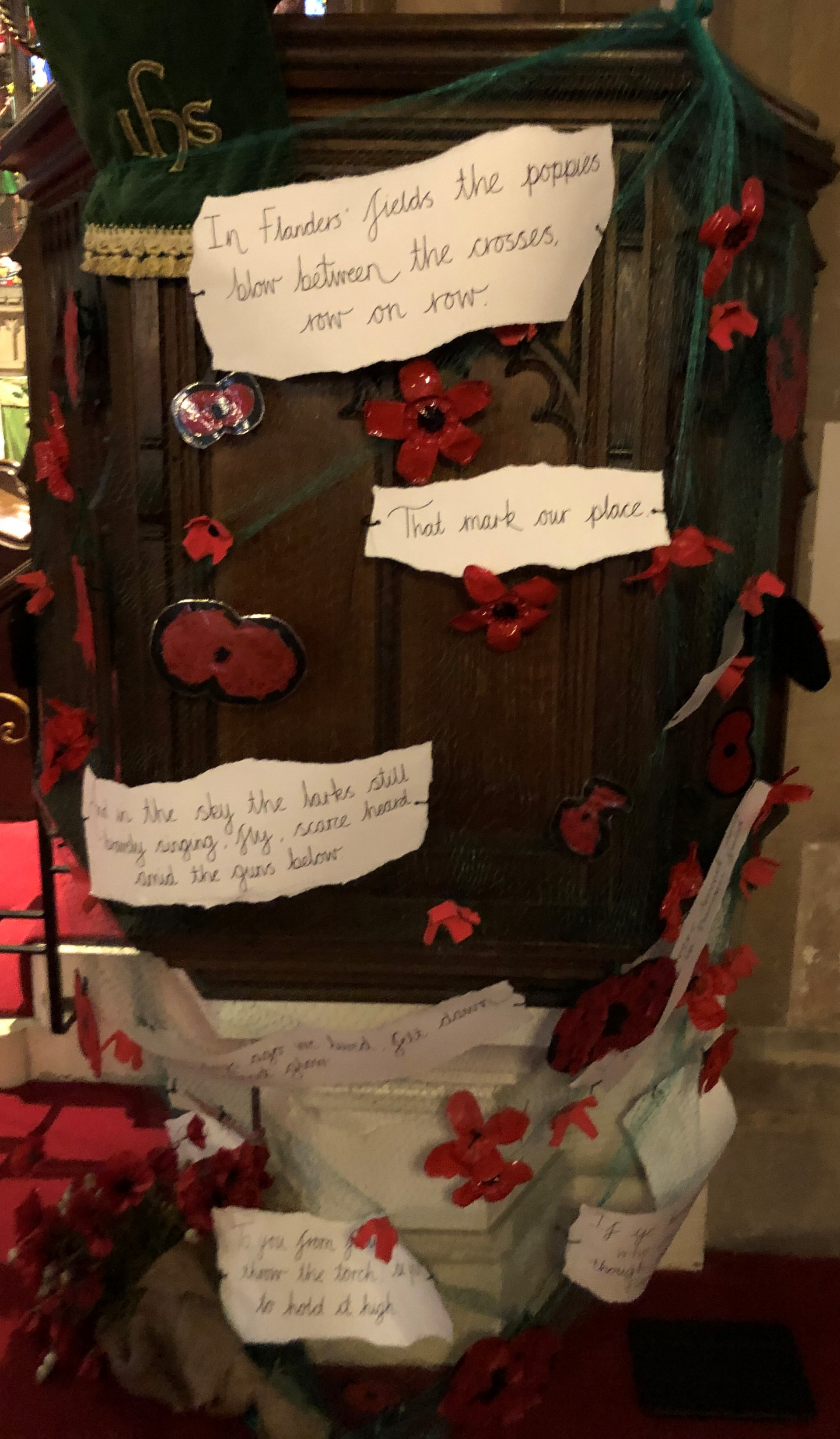 Each year we donate our Harvest gifts to our local food bank, St Paul’s Pantry.    They are incredibly grateful for your generous gifts from their message:

‘Thank you so much for all your donations for the foodbank here at St Paul’s Centre. The total weight of your donations is a fantastic 158.57kg!! Well done.

The next few months are predicted to see lots more people needing crisis food so it won’t be long until your food donations make their way into someone’s home.    I have attached some photos of crates and shelves that are now full which is wonderful!

I hope you have a great half term.     With sincere thanks from all of us at St Paul’s Centre and on behalf of the clients who will receive the food.’

In our world of 24-hour supermarkets – where we can pop in anytime to pick up what we need without any real thought – it can be easy for us all to take food for granted.    Sometimes we don’t even have to leave the house!    Harvest time is a great opportunity for us to express our gratitude for the land and people who produce them, and to thank God.

This morning we had the opportunity to express our thanks and support others who are less fortunate than ourselves.       Our new Head Pupils’, Dani and Ashton led the service and each class shared their thanks through poems, arts and singing.     The children’s Harvest donations will then be taken to St Paul's Pantry, who support individuals and families in crisis by providing emergency food in partnership with the local churches in and around Crewe.    Thank you for your generous donations.

Sharing the ‘Big Story’ with Our Families and the Local Community - May 2021
We have had a wonderful two days in school using ‘The greatest story ever told’.   It focuses on eight concepts at the heart of Christianity that we need to understand.  These concepts tell the ‘big story’ of the bible through the Old Testament – Creation, Fall, People of God to the New Testament -   Incarnation, Gospel, Salvation and Kingdom of God.   Each class focused on the concepts that they cover throughout their RE syllabus.

The children worked collaboratively to understand the meaning of their concept, then created some wonderful artwork which will be displayed in church this weekend for the Wakes Service.   They will then be presented in school for classes to use as they cover these areas during their RE lessons.

Spreading Hope Amongst Our Families and Local Community - May 2021

We took part in Morrisons  ‘Make Good Things Happen’ campaign in order to plant hope for a better future. As part of this, we’re shared ‘messages of hope’ with our extended families and local community.

We sent postcards with messages of hope such as ‘Hope to see you soon’ and ‘Hope your day is full of sunshine’ to our grandparents, friends or family members that they have not seen due to lockdown. We also sent some to our local care home residents and our elderly residents in our local community.

Spreading Kindness in Our Community - Easter Eggs and Cards April 2021

Thinking of Others - Random Act of Kindness - December 2020

One of our Year 1 pupils noticed that one of his elderly neighbours didn’t have a scarf, so he asked his mum if he could buy one for him out of his pocket money.    They then left it on his door.    The gentleman told his mum that he had been so touched by her son’s kindness.   We are all so proud of him – what a real superstar!

Raising Money for Others - Christingle - December 2020

After our Christingle Service the children took home some collection boxes to raise money for the Children’s Society who help children and young adults in the darkest of times.

Respecting Others in Our Community - Remembrance Day - November 2020

Our Year Six pupils led our Remembrance Service.     Over thirty of our families joined us for the service.    We appreciate you taking the time to join us as it made the service more meaningful for the children – thank you.   I’m sure you’ll agree they did an amazing job.    As part of the service, we heard about  Three brave young men from Warmingham gave their lives for their country during World War 1:

They are commemorated on the brass plaque on the west wall of St Leonard’s Church.    The clock in the clock tower was purchased after the war in their honour.    We also learnt about some of our relatives:

Officer Carl Hoyle who served 27 years in the RAF.    He completed several tours including some in Afghanistan, Iraq and Bosnia.  He even had a mention on the Queen’s Honours List and received a medal from her.

Private Dennis Rawlings who was killed in battle.

Corporal Stewart Butters served with the Corps of Royal Engineers for 13 years.  He received medals for serving in Iraq and Afghanistan.

Corporal Arthur Walker who was in command of a tank in World War Two.   He was involved in the D Day invasion.

Raising Money for Others - Children In Need - November 2020
The children enjoyed dressing up in something spotty and raised an incredible £171.20

In our world of 24-hour supermarkets – with their shelves bursting with countless pre-packaged forms of wheat, barley and their gluten-free equivalents, with multiple varieties of Manuka honey and chilli infused olive oil – it can be easy for us all to take food for granted.  Harvest time is a great opportunity for us to recall and celebrate together the origins of these good gifts – to express our gratitude for the land and people who produce them, and to thank God.      This morning we had the opportunity to express our thanks and support others who are less fortunate than ourselves with the help of St Paul's Pantry, our local food bank in Crewe.   Anna and Amelie, our Head Girls were both overwhelmed by the amount of Harvest gifts we received.   Thank you.

We now have a new clothes bin.    If you have any old clothes or shoes which you no longer require, could you please place them in the bin on the village hall car park.    The profits will be shared between us, the village hall and St Leonards.

Thanking Others in Our Community - Rainbows - September 2020

The children made some rainbows to thank all of the key workers and their family who have been working hard to help them safe during these challenging times.   The rainbows also included prayers for family and friends they haven't seen for a while.